Home » Clients » Getting to Zero: Why DC Must Implement A Right to Housing for People with HIV/AIDS
Tue04

Getting to Zero: Why DC Must Implement A Right to Housing for People with HIV/AIDS

Amber Harding delivered a version of the following speech at yesterday’s World AIDS Day Rally in front of the Wilson Building. 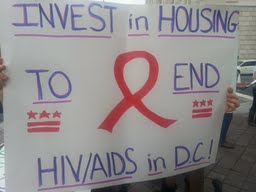 My focus since I started at the Legal Clinic in 2003 has been on ensuring that people with disabilities have equal access to emergency shelters and affordable housing programs. Over the years I have worked with a lot of clients who were HIV positive or who had AIDS. What many people may not realize is how housing can mean the difference between life and death to someone with HIV/AIDS.

My first year as attorney at the Legal Clinic, I met a woman with HIV/AIDS who I’ll call Ms. Johnson.* Ms. Johnson was staying at the family shelter called DC Village with her children. DC Village was a large homeless shelter for families, where all families ate in the same cafeteria, showered in shared bathrooms, and sometimes even slept in rooms separated from other families only by a curtain. When I met Ms. Johnson, she told me that she was having a really hard time there—she was catching every bug that went around because of all the shared space. She had been hospitalized three times in one month, was just getting over pneumonia, and had just been told that that her T cell count was dropping rapidly. I helped her request a move to an apartment-style shelter. There was no immediate opening and she was told she had to wait several months before she could transfer. She passed away before she could move.

And then there is Mr. Harrison*, who was diagnosed with HIV three years ago. After contracting pneumonia from staying in a cramped, communal shelter and almost dying as a result, he decided that he would try his chances on the street instead. (All emergency shelters for men in DC have hundreds of men sharing sleeping space with no way to limit exposure to viruses or infections.)  Mr. Harrison tries to take care of himself by eating healthy and exercising daily, but that’s hard to do when you can’t cook for yourself and have to find a different bench or step to fall asleep on each night. He has a doctor and has access to medication, but his medication upsets his stomach and makes him lose control of his bowels. Since Mr. Harrison does not always have access to a bathroom on the street, he’s decided to stop taking his HIV medication. Now he is no longer HIV positive. Instead, he has AIDS and his T cells are dangerously low.

Mr. Harrison talks about how he watches his weight to make sure he’s not “wasting,” which he knows is a sign that his body is failing him. A few months ago, he lost 30 pounds in a little over a month and had to be hospitalized. Luckily he recovered. He knows he may not be so lucky next time.

Mr. Harrison has been trying to get affordable housing for the last three years. He’s met with social workers, housing counselors, and lawyers – he’s applied to several different programs, but most were full and have long waiting lists. He actually did get into housing for people with HIV once, but that program was shut down only a few months after he entered. While he waits, he faces harassment on a daily basis. Men approach him and proposition him, offering sex in exchange for a place to sleep. He’s lost any hope that he will find housing assistance in the District, and instead he focuses on surviving for as long as he can on the street. He’s not alone.

Ms. Johnson didn’t have to die. Neither does Mr. Harrison. DC can, and should, make sure that Mr. Harrison and others like him don’t die on the street. No responsible plan to end HIV/AIDS can ignore the impact that a living environment has on a patient’s prognosis. DC must implement a right to housing for all DC residents with HIV/AIDS, and get to zero the number of residents who die on the street or in unsafe shelters.

This site uses Akismet to reduce spam. Learn how your comment data is processed.

To keep up with the latest actions, news, and events of the Legal Clinic click here to subscribe.